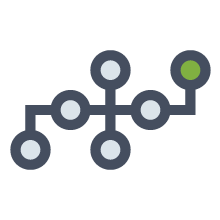 Network libraries allow Android apps to connect to other devices, online services and to set up asynchronous network requests.

If you want your library added to our list, suggest it to us.

Volley
Volley is an HTTP library that makes networking for Android apps easier and faster.
20.64% of apps
10.34% of installs

okHttp
OkHttp is an efficient HTTP client providing features such as SPDY, connection pooling, transparent…
9.22% of apps
5.81% of installs

dnsjava
dnsjava is an implementation of DNS in Java.
0.80% of apps
2.09% of installs

Apache Http Auth
The API for client-side HTTP authentication against a server.
2.61% of apps
1.75% of installs

The Java CIFS Client Library (JCIFS)
JCIFS is an open-source client library that implements the CIFS/SMB networking protocol in 100% Jav…
0.20% of apps
0.17% of installs

AndroidAsync
AndroidAsync is a low level network protocol library.
0.20% of apps
0.01% of installs